As part of the South Central Regional Council of Governments study, a full report was also produced. Only this draft version is known (do you have the final version?). East-west traffic in southern Hamden is a regional concern due to the proximity of North Haven and through traffic to western New Haven, near SCSU and into Westville.

Some recommendations from the report have been implemented, including bike “sharrows” on Putnam, speed humps on Treadwell, and improvements to the 5-points intersection at Mather, King, and Belmont. 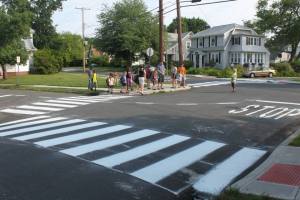 The town also provided a draft traffic calming policy and an earlier resource guide produced for the regional council.